@ Sychoff: please be respectful to members, use polite language. @ oddbbean: you the perfectionist can't explain a problem? 4stars because you don't know typography/calligraphy? It's your problem not the font's.

@ Sychoff: I apologise for my comment to you. I had forgotten that the name of this member has a quality that makes people upset. I always worry about the children who are making fonts here, they should not see certain words. I wrote you a message.

Nice! "z" seems a little off though, and so is the cyrillic "г", maybe try making it similar to latin "r", or try to find some alternatives for "z" and use it for cyrillic as well. Distinction between "б" and "в" may need to be more clear, maybe try to make the в's height same as x-height.

Dots abobe i and j don't quite fit I think, maybe try to make their shape like a rhombus or kite, similar to your dot and comma, like in cyrillic ё.

Nice addition to the original work. Cyrillic blackletters are rare, though not unheard of. Mainz also happens to be stencil. At first, I was puzzled by some of your letters, e.g.: б, в, г, д, л, until I realised you were using the cursive forms, which is very proper for blackletters. Still, there are some problems to be sorted out. Your letter д looks like a Latin d, or it could pass for a cursive Cyrillic б. The correct Cyrillic cursive д is more like the Latin g. As I understand, you are mixing block letters with cursive ones, and you are free to do so. However, it may lead to confusion and poor legibility. A case in point the fuzzy distinction between your б and в.For cursive form, the Cyrillic в is almost like the Latin b: same height, same loops. Should you go for the block/printed form, then it would look like the capital Latin B, only as tall as the x-height.

I very much like all of your letters, and especially the г. It is very pretty for a cursive form. There are many things to do to complete this beautiful project: numbers, punctuation marks, capitals, etc. Are you going to extend the Cyrillic set beyond Russian and Bulgarian to support other languages? Belarusian, Ukrainian, Serbian, Kyrgyz, Chuvash, Rusyn, Tatar, etc.?

Please note, I only wrote this critique, because I see you are very talented. I hope, you find my comment helpful. Feel free to write me in Russian.

@Frodo7: Thaks for your comment. In this font I used italic forms (top) of letters, not cursive/handwritten (below). Look at this font: http://www.myfonts.com/fonts/storm/moyenage/ . I will think about rest.

I am do not going to support other cyrillic languages soon. I am doing fonts for myself and this languages is not interesting to me. Bulgarian Cyrillic have another regular forms (second image). 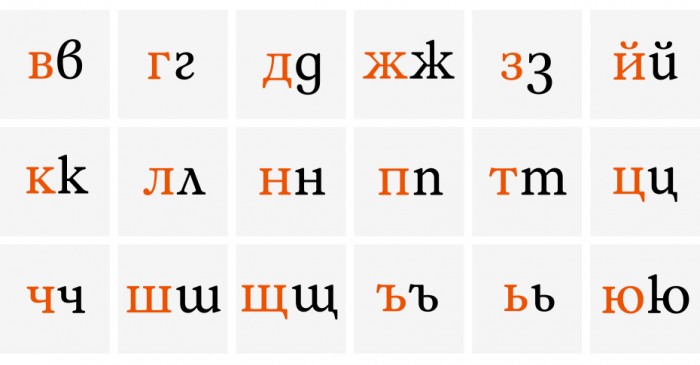 Your work is a valuable addition, it carries the spirit of the calligraphy style and it belongs perfectly into the Latin font. Frodo is right, you are very talented.

thank you very much, it is very encouraging